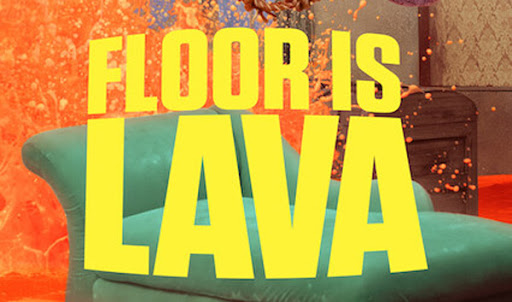 2 fallen obelisks out of 10

I’m sure, if you’ve been on Netflix lately, you would have seen their new show Floor Is Lava advertised/stuffed down your throat. Luckily for you, I finished watching all the eps of Nailed it! last night and thought I’d give it a go. Like Jesus, I’ve sacrificed myself so you all don’t have to go through the pain.

The best way to describe this show… American.

The competitors are overly dramatic, the host feels the need to spell everything out for us, and one of the teams literally wore American flag tank tops.

I was hoping it was going to be like Wipeout (remember Wipeout?!) but alas, I was wrong.

Essentially what this show is, if you haven’t figured it out already by the name, is 3 teams compete to get from one side of a room to the other without touching the “lava”. The team to do it with least amount of people “dying” wins. They win $10 000!!! The American television industry has too much money for its own good!

My favourite part is when someone does fall into the lava, they don’t show them coming back out. They go into the water, the team yells “noooooo”, and they keep playing. The fact that that is my favourite part really says something about this show.

While watching, you really get the feeling like they’ve been told what to do, what to grab, what to push over and what to move. All three teams did exactly the same thing. Someone walked over the Easter Island heads (and was wildly dramatic when they had to jump a metre to the third head), someone ended up on the pyramid (and met their inevitable death), and someone went and got the stick. I mean it is the first episode so they probably wanted to make sure it would all go ok but still, could have styled it out a little.

I’ve given it a 2, because that’s how many times I blew air out my nose when someone stacked it. I also only watched the first episode, so maybe it gets better… but I doubt it.